Neil Patel is the co-founder of Crazy Egg and Hello Bar - as well as the man behind Quick Sprout, a fantastic resource for Internet marketers.

In addition to being a serial entrepreneur, he is also known for putting out epic - and I mean, EPIC - amounts of content that helps his audience with Internet marketing.

He's been recognized by both the Wall Street Journal and Forbes - as well as by President Obama who recognized him as a top 100 entrepreneur under the age of 30. So maybe you can learn a thing or two from him. :)

In this interview, Neil shares how he got his start in entrepreneurship, what drives him, and even a fashion & style tip.

Can you give us a brief overview of what you do?

I blog on... Quick Sprout and Crazy Egg, and my software companies are Crazy Egg, again, and Hello Bar.

You've achieved tremendous success, but you had to start somewhere. What is your back story, and how did your entrepreneurial journey begin?

Neil: When I was 16, I created an online website, and it was the Job Board. With that Job Board, I was trying to figure out how to get people to come there and actually pay to post jobs.

Now, the business never worked out because I had no traffic, but when I look at all of it, I learned a valuable skillset from it.

I had to learn how to drive traffic to my own website. I didn't have much money, so I had to end up figuring out how to do SEO at the time on my own.

I used social media marketing as well - and from there, I got good at traffic generation. I wasn't that good at conversion optimization when I was younger.

But traffic generation was a skill that was good enough where I could pitch it to other businesses through cold calling, and eventually, I started getting paid customers.

Was getting traffic your biggest challenge early on? And how did you end up overcoming it?

Neil: Yeah, biggest challenge at the time was getting traffic - and I got over it by just testing stuff out on my own website to figure out what works, what doesn't, etc.

So all that was testing for traffic generation.

Going from where you were to where you are now, if you had to narrow it down, what 2-3 factors would you say helped you the most?

Neil: I would just track rankings, track website traffic, and I would also track sales.

If the traffic's not converting, eventually you'll know you're doing something wrong.

From a personal development standpoint, what are some key habits that you have that have helped contribute to your success?

Neil: So with me, I never stop. I keep going no matter what.

And if something's working out - great - or it's not, I just keep trying to figure out a solution around it.

It doesn't matter if I have a ton of money, no money, things are against me – I always trying to figure out solutions.

Neil: I think my mom, right? My mom was very similar - she kept going, she was very resilient.

My dad was as well. And they were just hard workers – I think it runs in the family.

That's great. So you're involved now in multiple businesses and ventures. When you first start a business, how do you go about getting traction for it? Is it a lot of the testing that you mentioned previously?

Neil: Yeah, it's a lot of testing.

The other thing that we end up doing is any time we start a new business, we start a blog. We try to build up the email list, and all those people could be potential customers. It takes awhile.

And on the topic of blogs – you are well-known for putting out prolific amounts of content. How in the world do you put out so much content?

Neil: Well, blogging is a lot of my day. I don't really have to go into the office or do a ton of meetings. I blog a lot.

So what else does your typical day look like besides blogging?

What are some resources - whether they are podcasts or books, other stuff - that really give you some inspiration, where you draw ideas from?

Neil: Yeah, so for me, I'm a big believer in looking at what's creative online.

What inspires me is I'll go to sites like Reddit, try to find what's up and coming, what people are doing that's really creative - and learn from it. And then go from there.

So I don't really look at too many books... it's mostly what's doing really well on the web that's going viral that I can learn from and be inspired by.

Now, switching from business to grooming – what are your thoughts on grooming and its impact on your success and just success in general for guys?

Neil: Yeah, I think it's a huge impact.

Every little bit adds up, it's all about trying to figure out how to fine-tune.

How much thought do you put into your style in fashion and grooming, making sure that you look good on a daily basis?

Neil: I don't put that much thought into it.... but it does help.

Now, it doesn't help everywhere. Like San Francisco, it doesn't matter as much. New York, it matters. There's certain cities where it does help - Los Angeles, it matters.

So knowing those cities and knowing where to dress nice, cause people judge you based on your appearance in certain areas. So just playing into it will actually help you get more deals.

I remember I had somebody ended up telling me: 'I bought a new outfit and shoes based off your recommendations, and you know what? I made more money. I got a new contracting gig and a few other things that were moving really slow all because of my appearance - it really helps a lot, and they even commented on it.'

Now, in your personal experience, can you provide the audience with just one fashion & style tip that you follow?

Too many people try to "bling" themselves out with flashy things.

Just get some nice pieces that are really classic, and it'll last you for a very long time.

How can our readers follow you and find out what you're up to?

Neil: They can just check out QuickSprout.com!

Step Up Your Game

Thanks to Neil for the interview! As Neil indicated in the interview, having a good appearance can certainly help in business and your career.

Looking dapper can help. But what if you absolutely hate going shopping?

Then you should check out "Doorstep Dapperness", which is a list of 37 ways to get "dapperness" regularly delivered to you.

You can also download your free copy of "Doorstep Dapperness: 37 Ways to Get Dapperness Regularly Delivered to Your Door" by clicking the image below: 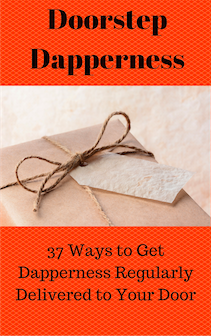